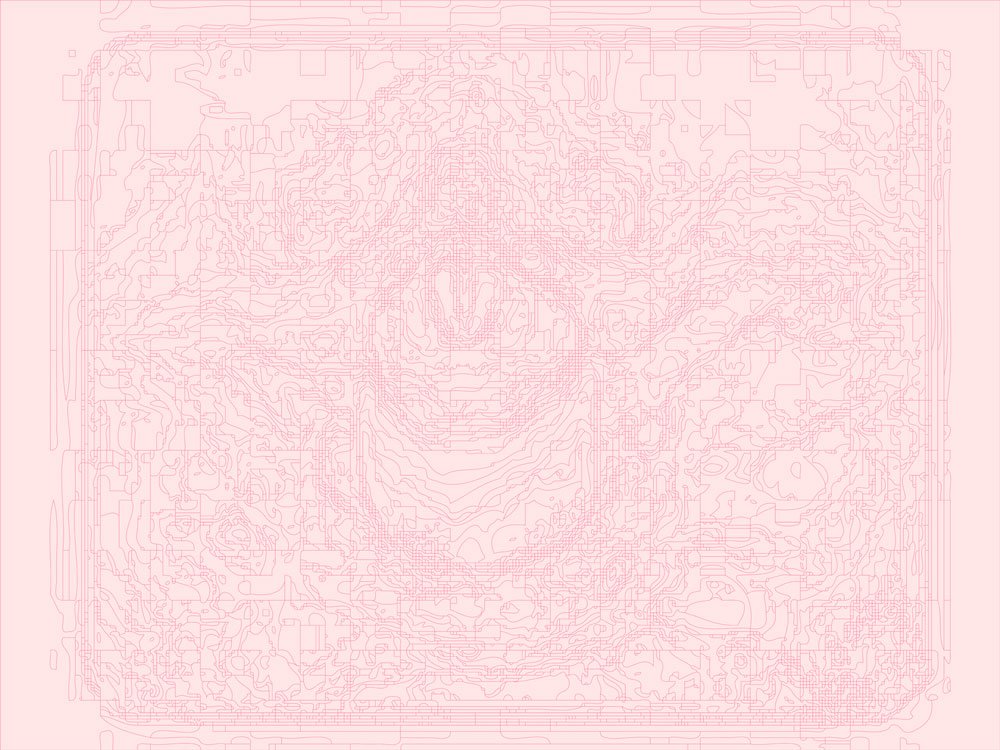 Communication is a collaborative process between listener and speaker that implicates both their sensory bodies. In consideration of what Roland Barthes called the “grain” of the voice, I think about how contemporary technological tools listen to and reproduce this naturalized, sonorous voice, concretize it, compress it, amplify it, and sometimes distort it. What we consider our voice in a technologically mediated environment is a visual-vocal-technological assemblage that implicates amplification, scale, human and digital bodies and networks. The multiplication and proliferation of voice on someone else’s device happens in asynchronous ways, much the same as a vocal score is a vocal performance that lay crystalized and dormant until activated by human action.

This series of printed works is a set of vocal quartets created from the original material of the human voice, the larynx, which was amplified/reproduced/echoed through visual perception processes in machine and human cognizers and re-performed by multiple human singers. In endoscopic photography the flesh material of the larynx is extended through the sensory mechanisms of a machine. Light bounces off the flesh of the larynx and is interpreted by a camera as pixel data. This digital image is made of raster pixels faithful to their fleshy origins but limited in detail. If one amplifies the raster image of the voice (zoom) the image reveals its materiality as a technical assemblage. I transformed the raster image into a vector in order to continue playing with bouncing machine processes off one another to “voice” how a machine might perceive this human larynx. While the rasterization process I used eliminated the fleshy details of the original larynx, the image emphasized original architectural structures of the larynx, which now more closely resembled a topographical map, or circuit board. This technologically processed version of the larynx could be infinitely amplified or diminished without loss or distortion. At this point I detected an unexpected feature: my associative, human perception could see markings that resembled Western notation at the edges of this transformed image of the human voice, complete with staves, bar lines and notes. My transcription process included dividing each bar into four equal parts, and then transcribing rhythms in a linear relationship to where the small note-like marks were present horizontally in common 4/4 time.  Pitches were interpreted as they appeared vertically on the abstracted staves.

Since there exist four sides to each two-dimensional image, there were four staves for each representation of the larynx in the series. I set this music into four separate vocal partitions for choral song: returning this technologically amplified process of voicing back into multiple human throats.

Larynx3 (edition 1/5) was purchased by the Saskatchewan Arts Board for their permanent collection in 2019. 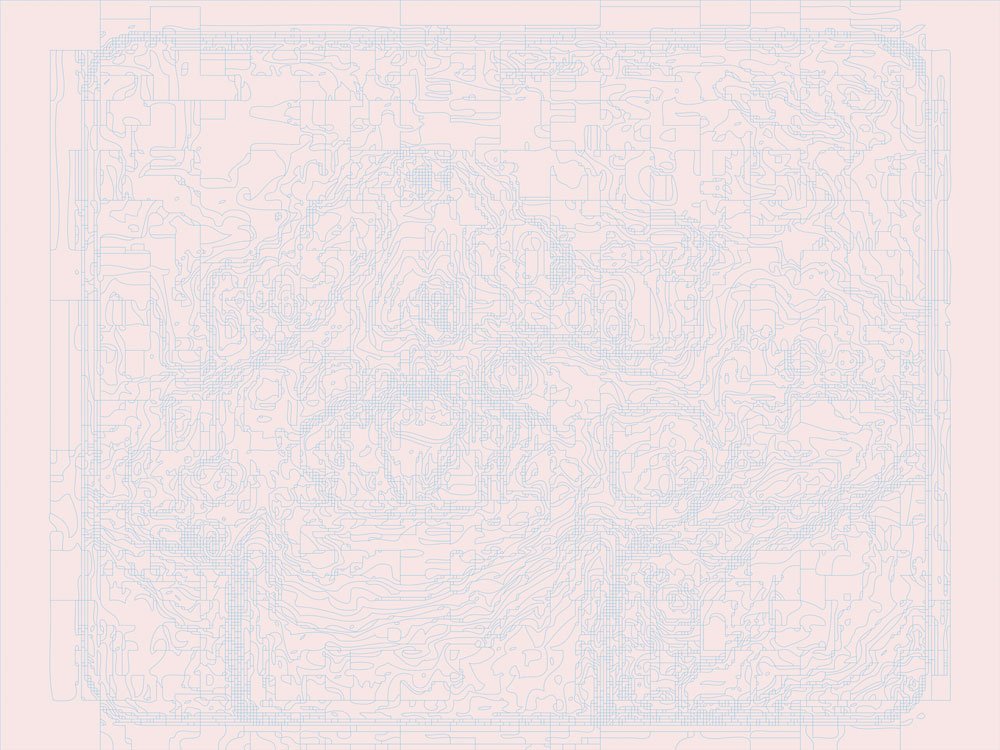 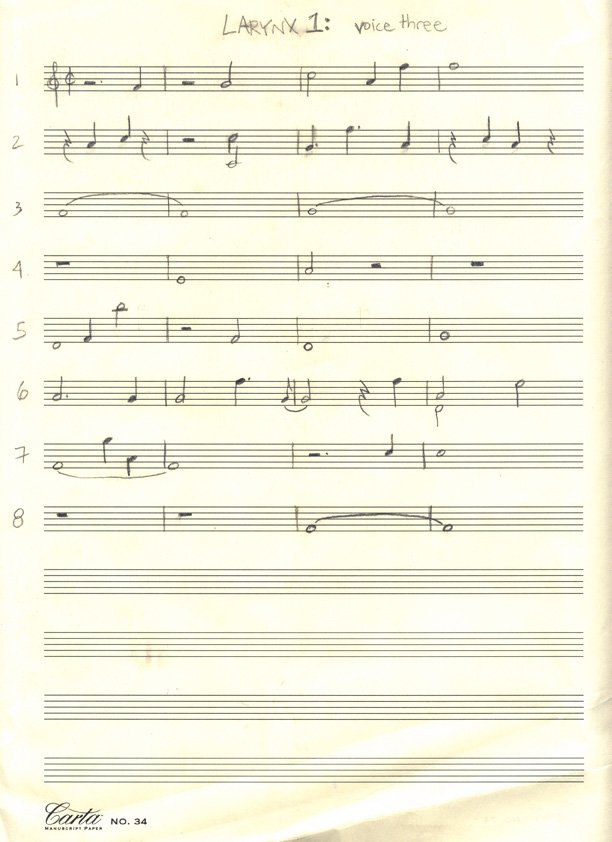 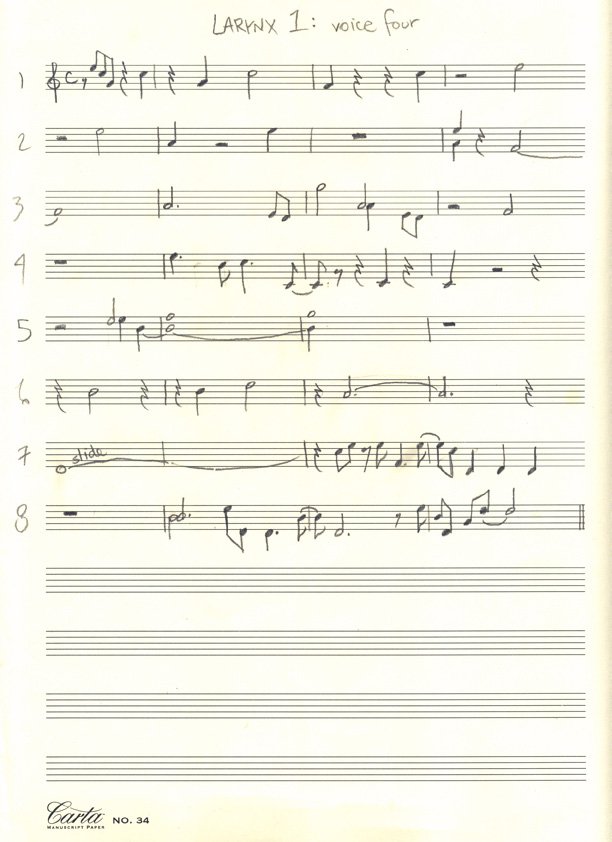 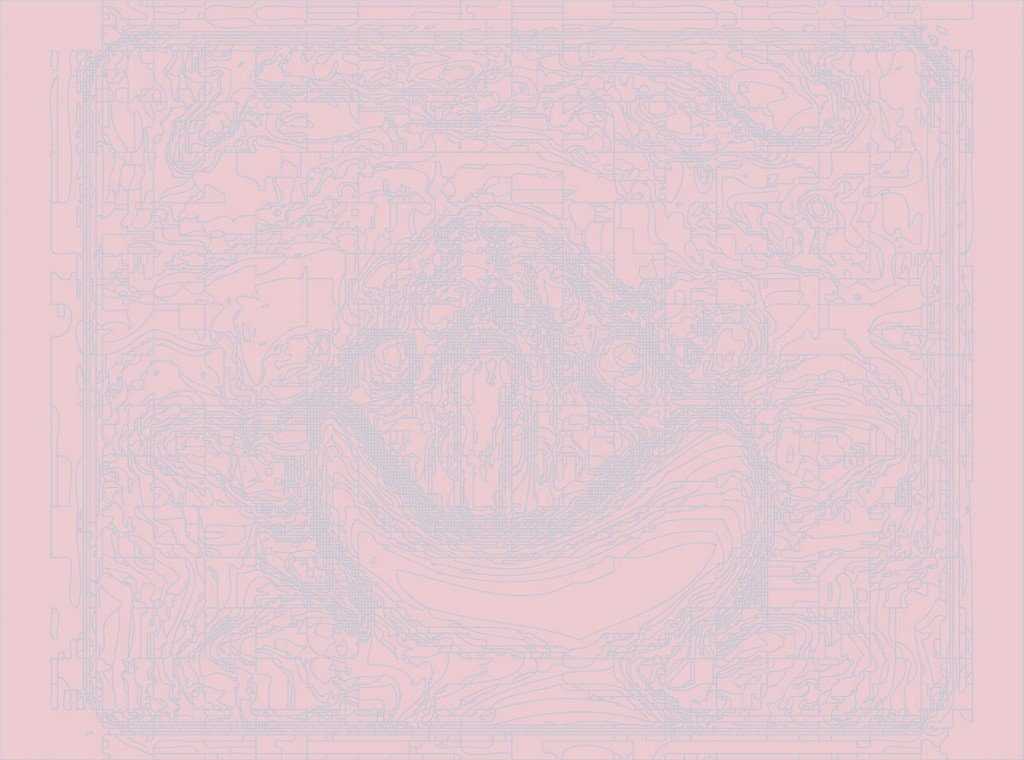 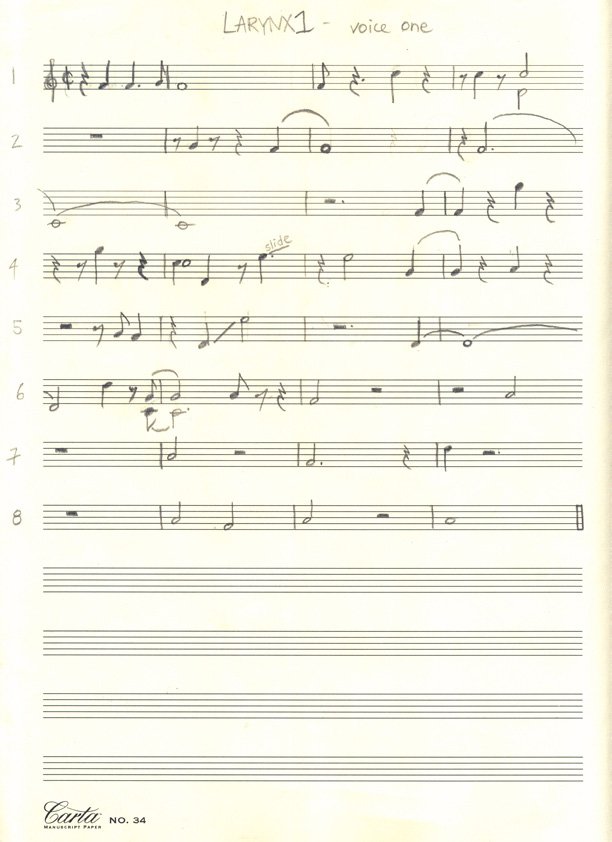 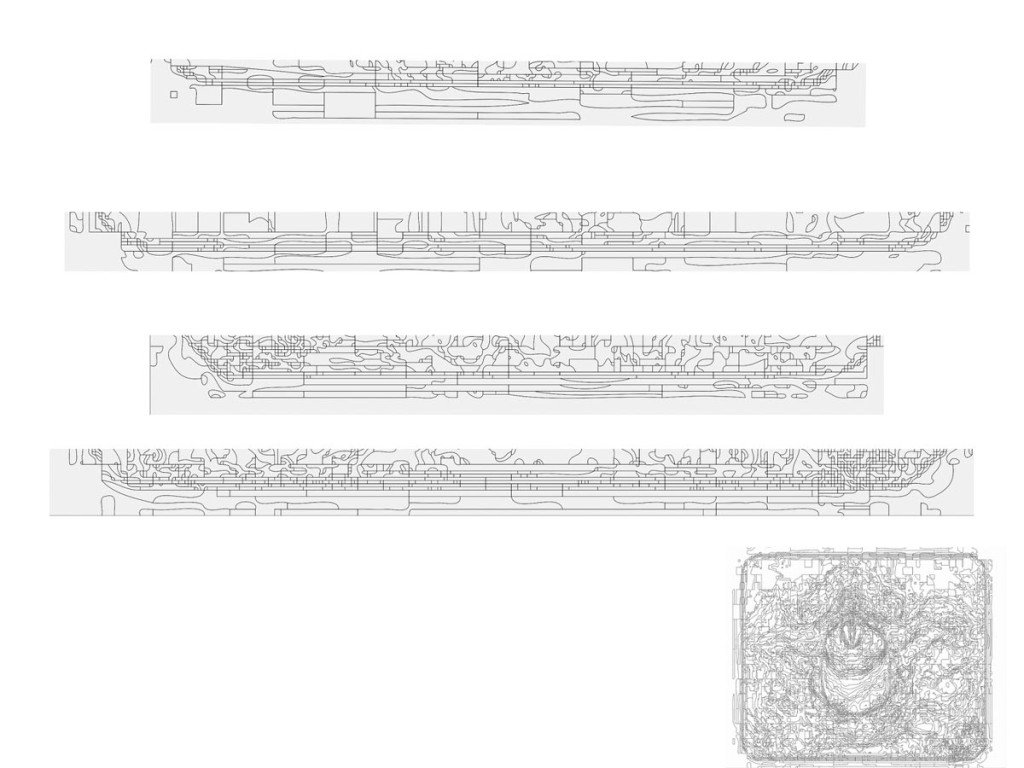 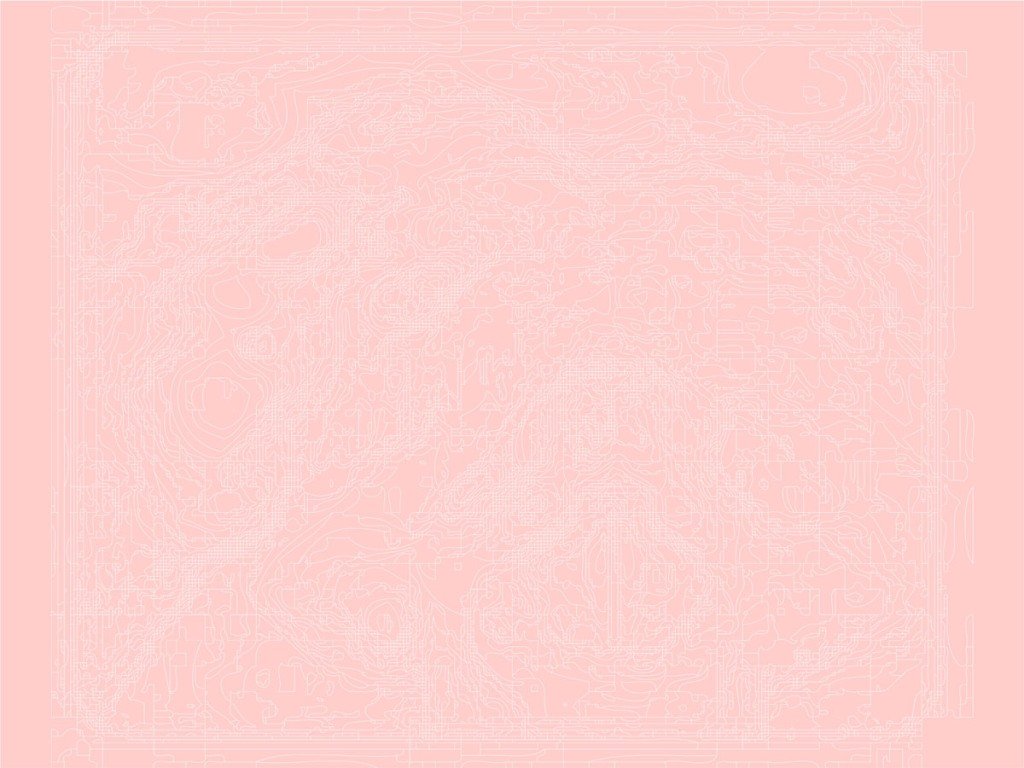 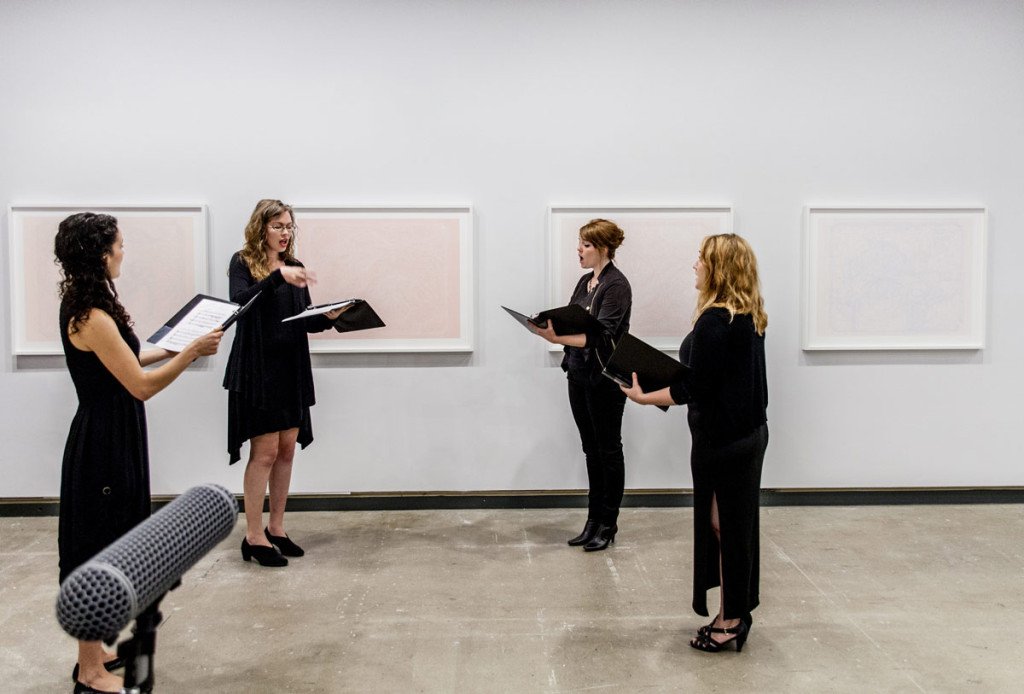