Inspired by the human voice as a conceptual object, media artist and composer Erin Gee ( TIO’TIA:KE – MONTREAL) likens the vibration of vocal folds to electricity and data across systems, or vibrations across matter. Her work in neural networks, choral composition, ASMR, virtual reality, networked music performance, and robotics have been shown in solo exhibition at MacKenzie Art Gallery (CA) and in group exhibitions at MUTEK (AR/ES/CA), LEV Festival (ES), Darling Foundry (CA), Toronto Biennale (CA), NRW Forum (DE), and Ars Electronica (AT). She is a DIY expert in affective biofeedback, implicating the body of the listener as part of her cybernetic systems in place.

After earning an MFA in Studio Arts from Concordia University, Gee was hired as a Limited-term Assistant Professor at Concordia University (2015-2017) teaching Sound Production, Gender and Technology Studies, and Sound Studies. She is currently a SSHRC Canada Graduate Scholar and doctoral student in Composition et Création Sonore at Université de Montréal, articulating feminist methods for composing through biofeedback music.

She is currently artist in residence at the Institut Quantique de l’Université de Sherbrooke in partnership with Sporobole artist-run centre (CA), exploring  ways to enact the radical embodiment of matter.

Gee’s artistic research has been featured in neural.it, Scientific American blog, VICE, MusicWorks, and Canadian Art magazine. She has received awards from the Canada Council for the Arts, and the Conseil des arts et lettres du Québec, as well as support from the Conseil des Arts de Montreal, the Social Sciences and Humanities Research Council of Canada, and the Saskatchewan Arts Board.  She is grateful for their continued support of the arts.

Gee’s work can be found in public and private collections. She is an active member of Perte de Signal artist collective (Montreal) and is represented by Wicked Artists.

Notes on my Practice

Through my practice in sound, new media, and music composition I articulate the materials of the human body and voice through interactive and emergent technologies such as VR, robotics, children’s choir, ASMR vocalizations, and affective biosensors.

Through this work I enact critical technical reimaginings of emotion as instrumentalized, denaturalized, or transformed into a technology in itself. Emotion has been historically naturalized and gendered as something inherently feminine: I create works based off of ambiguous sincerity, acting, and placebos as feminist tactic. While machines and computers may have at one time been solidly conceived of as purely logical and rational machines, the technologies and practices of social media have laid bare how emotional and manipulative our algorithms have made us. Feminist strategies of emotional reproduction contain valuable knowledges for how to read contemporary technology as a reflection of our daily life, to see affect as political, and how we can use technology to reimagine our own bodies, critically embracing emotional performance and production as survival mechanisms in a fully automated world.

As originally posited by Donna Haraway in her 1989 Cyborg Manifesto, the political possibility in the cyborg lay not in a comfortable technological fetishization of technology, which reifies systems of normative power, but through a critical rejection of the origin of the human. Historically, which bodies are deemed as fully, partially or ambiguously human has been an expression of shifting politics and agencies more than biological fact—women, people of color, and those deemed atypical in neurological functioning or physical capability have all suffered historically under categories of the “human” and “humane”. In light of these historical factors, my exploration of technology enacts a feminist perversion of human narcissism in machinic coupling, wherein I use sonic structures as a playground for proposing systems where anti-oppressive values embodiment, intimacy, listening, and empathy over values of consciousness, rationality, intelligence, and power. 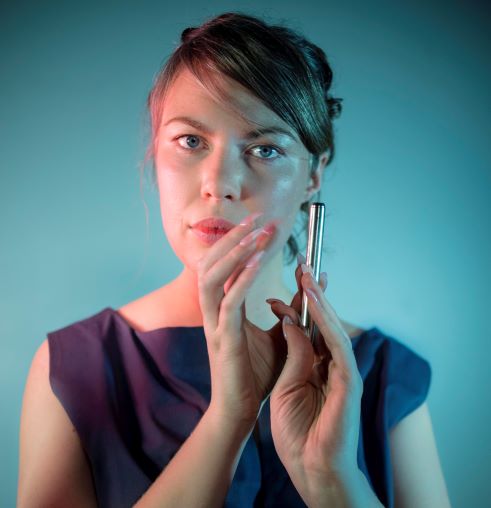 Are you looking for American composer Erin Gee (USA, b. 1974) who is known for her composition series Mouthpieces?  Click here for her website.