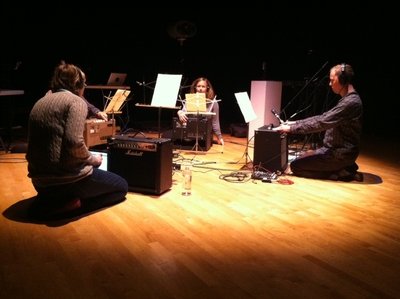 Body Radio is a composition for four performers that reverses the interiority/exteriority of a radio, which is a human voice in an electronic body. Small wireless microphones are placed directly in the mouths of the performers, who are each facing a guitar amplifier. The performers control the sensitivity of both the amplifier’s receiving function and the microphone’s sending function in accordance with the score. The final sounds are a combination of inner mouth noises, breathing, and varying pitches feedback controlled by the opening and closing of mouths.