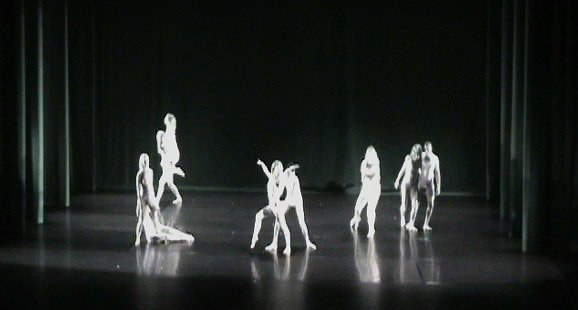 2plus2 is a collaborative work inspired by the 1967 painting of the same title by Douglas Morton, with musical composition by myself and choreography by Robin Poitras. A goal in my composition was to marry volume and weight with the lively colour and joy embodied in Morton’s work, using such reference points as jazz music, as well as the sonic similarities between vintage sci-fi and nature documentary films. The final work is an exploration of opposite forces, partnering, and twinned bodies, exploring the evolution of a species, learned behavior, community, and time.

This short prologue was premiered in September 2009 as part of CrossHatch: Dance and the Arts in three Saskatchewan cities.

The prologue for 2plus2 was premiered in September 2009 as part of CrossHatch: Dance and the Arts in three Saskatchewan cities. Poitras and I will continue in 2010 to complete the project with a larger work for two dancers.